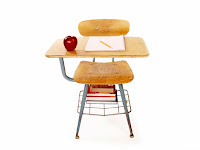 These three words mean many different things to many different people. For kids, it’s a mixed bag: some are excited, others hesitant, others filled with overwhelming rage. On the other hand, most parents are ready to drop their kids off in the morning on the first day, and then take themselves out for a celebratory breakfast, to congratulate each other for surviving another summer with their children. Teachers are polishing off the last of the summertime wine, and trudging back to the classroom to put up happy looking bulletin boards, whether they like it or not.

Back to school time means many different things to library staff as well. For people working at the front desk, there is a chance that they could be crushed by the amount of end-of-the-summer returned items. I don’t think a tower of toppling books ever crossed your mind as a work hazard, did it? The children’s staff looks forward to August and September, when they can take a bit of a breather from the Summer Reading madness, make sure the books are in order, and dust off the textbooks for the kids who left their math books in their lockers and have homework due yesterday.

In Area-T, the fabulous space for teens that we have created, the insanity is just beginning! Summertime in the teen room is fairly laid back. We have many well-attended programs, and many people stop by for books, but nothing compares to the swell of 13-18 year-olds that fill Area-T after school on a daily basis.

Last school year, there were upwards of 45-50 kids hanging out, using the computers, playing video games, reading, making crafts, playing board games, and goofing off on a regular basis…meaning Monday through Friday, from 2:35 until they have to leave for dinner.

During the renovation in September 2011, Area-T moved from the corner of the library to an enclosed area, so the kids can talk in normal voices, play games, have fun, but not disturb the other patrons.  As seeing 50 kids in a closed-off room in the library can be exciting for some, the sight is intimidating to others…especially kids who are new library patrons, new to Plainfield, or even younger teens that are new to middle school. Most of the time I’m intimidated by seeing a million kids in there! However, after teens stop by and hang out once or twice, they have the opportunity to make friends that they wouldn’t normally make and have a blast. There is always a staff member at the Area-T desk after school, so teens can ask any questions that they have without even leaving the room!

Speaking on behalf of the teen staff, we want everyone to know that we want any teen in Plainfield, especially kids who are new 6th graders, to stop by and check out our space on Thursday, August 16th, from 3pm-8pm, for our Area-T Open House. We want to have the chance to show everyone our space, and give folks the lowdown on how much Area-T has to offer for the teens of Plainfield. There will be a quick craft to make, as well as free paperback books while they last! See you there!