Check out our most popular digital resources!

you love history and looking at nostalgic photographs, you’ll want to check out these new pictorial books on Plainfield and Hendricks County, Indiana.  The library has several copies in the collection–if they’re all checked out, be sure to place a hold through Evergreen so that you’ll be next in line when a copy is returned.

Head up the stairs and check out the “Meet Me at the Fair” display featuring art by Wyatt LeGrand.

July has some great new books coming out that readers will be looking forward to reading. New books by Alex Kava and Daniel Silva I highly recommend to readers. Silva’s is titled The English Girl and Kiva’s is Stranded. I am also picking The White Princess by Philippa Gregory for fans of English history. Other new books include The Highway by C.J. Box, Death Angel by Linda Fairstein and James Lee Burke’s The Light of the World. As the Readers Advisor readers are always recommending authors to me and I am always happy to pass on their suggestions. Recently one of our readers told me that he had been reading John Hart who writes mysteries. He said that The Last Child by Hart was one of the best mysteries he has ever read So I thought I would pass this along to those of you who are always looking for a new author to read. Hart’s other books are The King of Lies and Down River. While I can’t read everything readers recommend to me I am always happy to hear when they have discovered a new author. Nothing pleases me more than to hear from a reader who tells me that they have loved an author I have recommended to them. Enjoy the rest of summer with a good book!

Beginning on May 15th, patrons of hundreds of participating Indiana libraries can download The Four Corners of the Sky in Kindle, EPUB, PDF formats via their library’s OverDrive eBook catalogue. Notable libraries participating in the The Big Library Read include The Indianapolis Public Library and the eIndiana Digital Consortium, which consists of 78 Evergreen Indiana libraries. Patrons will have unlimited access (no holds or waiting lists) to the selected title throughout the duration the pilot program.

Patrons only need a valid library card and an electronic device (personal computer, tablet, Smartphone, eReader, etc.) connected online to participate. In an effort to promote a global community of readers, patrons are encouraged join the conversation on Twitter at #BigLibraryRead and “Like” Michael Malone on Facebook.

Browse through hundreds of historic photographs of Plainfield and other Hendricks County towns and villages here.

While working the check-out desk at the library in 2011 a patron started gushing about a television series called Downton Abbey.  She explained that the series was about an aristocratic family in England, they had servants, etc.  I listened to the patron while thinking the series didn’t sound like my cup of tea.  Just when I was thinking that the patron said, “You would really like it. I just know you would.” That comment surprised me especially since I didn’t know the patron at all, and they didn’t know me. Inwardly I thought, “Challenge accepted.”  From that moment on I was prepared to hate Downton Abbey.
When Downton Abbey’s first season came out on DVD I put a hold on it at the library and finally one day I sat down ready to hate its guts.  But I didn’t hate its guts.  I absolutely freaking loved its guts!
I loved following the lives of the Grantham and Crawley families and their servants. The series began with the death of Downton Abbey’s heir in the sinking of the Titanic and then delved into securing a new heir, the distant and quite modern cousin Matthew Crawley.  Lord Grantham is of course interested in marrying off his daughters, which backfired on more than one occasion. Lady Mary, Lord Grantham’s eldest daughter, is my favorite of the upstairs characters. She can be selfish, arrogant and cold, but she feels very deeply and cares about the servants downstairs. 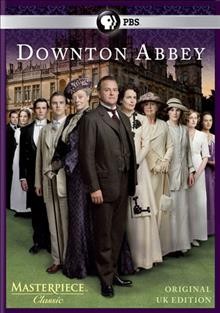 And then there are the servants, the people who make it possible for the aristocratic family to enjoy the cushy life they are accustomed to.  They are the grunt laborers who spend the majority of their time and lives cleaning, primping, cooking, and caring for their masters. There are so many great servant characters but my favorite is Daisy, the scullery maid. She is young and unsure, but a completely genuine spirit who never fails to make me laugh.
So now that I am an official Downton fan I thought it might be fun for other fans of the series to take part in a very special High Tea at Downton Abbey on Sunday, May 19 from 2:00-3:00pm. Participants will get a taste of Downton Abbey life with a special English high tea at the library. Tina Jesson from Tina’s Old Traditional English Tea Kitchen will talk about life during the time of Downton Abbey, etiquette, and master/servant relations during the post-Edwardian era.
Participants will enjoy scrumptious scones served with several jams and clotted cream, a variety of delicious sandwiches, as well as English Breakfast Tea with cream served straight from the pot. Attendees are encouraged to dress up and bring their own tea cup and saucer. Registration for this event can be done at the main Desk in the library beginning April 1. A registration fee of $13 will be accepted at the time of sign-up.

If this sounds like your cup of tea (pun intended) please give me a call and I can point you in the right direction!