If you’re in the mood for a little western fun then Linda Lael Miller is a “must read” author. Her contemporary western fiction includes some of the best romance series that can be found. Known as “The First Lady of the West,” she is a New York Times bestselling author.

If you haven’t read any of Linda Lael Miller’s books I am recommending her Montana Creed series about four brothers who find the women who can lasso their hearts. The first book in the series is Logan followed by Dylan, Tyler and Lincoln. Each story is a fun read and will have you turning the pages and staying up late to finish them. If you like this series you should also read her newest series titled Parable, Montana. The first book in the series is titled Big Sky Country followed by Big Sky Mountain and Big Sky River. 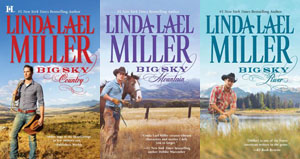 GONE WITH THE WIND…

The book that comes to mind during Banned Books Week is Gone with the Wind.  I have read it several times and find that I can’t believe someone could possibly write a book this good.   However, as with most classics there is criticism.  In several articles that I have read about this book it is because of the terminology and the way certain people are perceived in the book.  Books can’t jump off the shelf and make you read them.  You can pick them up, read them or leave them on the shelf unopened.  The only time a book has any strength is when the reader reads the book and then forms their own opinion.  Writing a book takes a certain amount of creativity and hard work to get to the point where it makes sense and captures what the author is trying to articulate.  I have never attempted to write a book, but I would assume it is a very hard, but passionate thing to do.  Here is what is written about the book from the website along with other banned books, www.bannedbooksweek.org/bannedbooksthatshapedamerica.

Gone With the Wind, Margaret Mitchell, 1936

The Pulitzer-prize winning novel (which three years after its publication became an Academy-Award Winning film) follows the life of the spoiled daughter of a southern plantation owner just before and then after the fall of the Confederacy and decline of the South in the aftermath of the Civil War. Critically praised for its thought-provoking and realistic depiction of ante- and postbellum life in the South, it has also been banned for more or less the same reasons. Its realism has come under fire, specifically its realistic portrayal – though at times perhaps tending toward optimistic — of slavery and use of the words “nigger” and “darkies.”

So really what we are talking about is the freedom to read what we want and to have our own opinions about what we read.