Whenever someone finds out my latest book, the thriller THE FINAL MAYAN PROPHECY, is about December 21, 2012 and the end of the Mayan calendar on that date, they ask if it really means the end of the world.

I don’t want to talk too much about the book and give away the end because I hope you’ll read it 🙂 –so let me answer it in a completely different way. Let’s take a look at some of the more popular ways people are predicting the earth will be destroyed in 2012, some in conjunction with this Mayan end date:

So, after looking at these scenarios, I think the odds are small that December 21, 2012 will be the end of time.

Did the Mayans think that way? My personal philosophy is always one of great hope, that even out of the worst situations, good emerges. To find out if and how I carry this through the plot of THE FINAL MAYAN PROPHECY, you’ll need to read it. I thank you if you do.

**If you read this blog and would like to read one of Tony’s books, he will give you for free the e-book version of his first novel, SECOND ADVENT, which was published by Five Star in 2002. Write him through the Plainfield Public Library at communitycentral@plainfieldlibrary.net to obtain it with “Tony Perona” in the subject line or body.

THE FINAL MAYAN PROPHECY, written by Tony and television producer Paul Skorich, is available in all e-book formats through his publisher at www.smashwords.com ($3.99 US, and at other popular e-book sites like www.barnesandnoble.com and www.amazon.com. You can also obtain a paperback version ($9.99 plus taxes and shipping) through amazon.**

There’s nothing I like better than to curl up with a good, curious mystery book.  Whether it’s during my lunch break, on the couch in the evening, just before bed, on an airplane, on the beach, in a waiting room…doesn’t matter where.  I love a good murder mystery!

The literary establishment calls them “cozy mysteries”.  I call them entertaining.  A brief step out of reality.  Not only do I get to work on honing my detective skills while reading, I often learn a new recipe or tip for brewing a good cup of tea.  My husband thinks the titles are funny—like Scones and Bones,  Hail to the Chef or Scrub-a-Dub Dead. 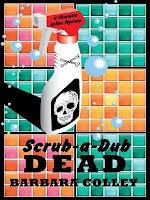 Two websites that are especially good for finding cozy mysteries are:

Both places will help you find authors to read, find the books in chronological order (a must-have if you’re reading an authors series), and alert you to upcoming titles and new authors.  Plainfield-Guilford Township Public Library belongs to Evergreen, which means if you can’t locate a title in our collection, you can most likely find one at another Evergreen library and have it sent here for you!

Some of my favorite cozy mystery authors are:

(And yes, I know…they’re all female writers!)

If you’re in the mood for something light, fun, and entertaining—why not try a cozy mystery?  If you need a suggestion, I’ll be glad to help!