Hello! For those of you who don’t know me, I’m Courtney, the Teen Services Coordinator. I spend the majority of my time back in area T. My job offers me the awesome opportunity to order all of the teen fiction for the library as well as plan teen programs. How cool is that? As you may’ve guessed, I’m a huge fan of teen fiction and I believe it’s a genre that can be enjoyed by other adults as well. Seriously! I’ve composed a list of my top 10-ish favorite teen books of the moment. Give one a try and let me know what you think!

The Fault in Our Stars by John Green – Before I tell you about this book I must confess, I’m a huge John Green fan. I love his books and his vlog that he does with his brother Hank. I could write an entire blog entry on how much I love his work. But I won’t. Well, maybe later. Anyway, back to The Fault in Our Stars. Hazel is a sixteen year old terminal cancer patient. She spends her days watching TV and being obsessed with the author of her favorite book. Her life is forever changed when Augustus Waters shows up at her cancer support group. Upon this meeting, Gus and Hazel’s life will never be the same. Be sure to check out John Green’s other books: Looking for Alaska, and Paper Towns.

The Perks of Being a Wallflower by Stephen Chbosky – Told in a diary format, this book is a coming-of-age story about Charlie that follows him through his awkward adolescence as well as learning to cope with the tragedy in his life. Soon to be a movie starring Emma Watson of Harry Potter fame.

Nick and Norah’s Infinite Playlist by Rachel Cohn and David Levithan – After his band plays, Nick asks Norah, a complete stranger, to be his girlfriend for five minutes to avoid his ex. This action sets off a chain of events that sends the couple all over NYC. Music fans will love this one.

Anna and the French Kiss by Stephanie Perkins – Anna’s dad sends her to boarding school in Paris. Here she meets St. Clair and they become best friends, but Anna may want something more. If you like this one, be sure to check out the companion novel: Lola and the Boy Next Door.

Thirteen Reasons Why by Jay Asher- Clay comes home to find a box full of cassette tapes waiting for him. On the tapes is the voice of Hannah Baker who committed suicide two weeks before. Hannah explains the thirteen reasons why she decided to end her life and Clay is one of the reasons.

Heist Society by Ally Carter – Kat has always had a hand in the family business; her family just happens to be con artists and thieves. She tries to escape the lifestyle, but is pulled back in when her father is accused of stealing a mobster’s art collection. Kat’s only option is to steal the paintings back to clear her father’s name. Be sure to check out the sequel: Uncommon Criminals.

Before I Fall by Lauren Oliver – After she dies in a car crash, Samantha relives the day of her death over and over.

If I Stay by Gayle Forman – Mia is in a coma following an accident that killed her entire family. The story follows her process of deciding whether to stay or join her family.

Sloppy Firsts by Megan McCafferty – Jessica is devastated when her best friend, Hope, moves away. Now she must face the trials and tribulations of high school alone. This book is the first in a series.

Elsewhere by Gabrielle Zevin – After Liz is hit by a taxi and killed, she finds herself in a place that’s very much like Earth. She has to adjust to her new life and figure out how to “live.”

Whip it by Shauna Cross – Bliss is a rebel. She’s out of place in her small Texas town and doesn’t always see eye to eye with her beauty pageant obsessed mother. Then she discovers roller derby and starts skating under the name Babe Ruthless. As a huge roller derby fan myself, I loved everything about this book. Did you know that Indiana has a number of female roller derby teams? If you get a chance, you should check out Naptown Roller Girls, or Circle City Derby Girls.

Who’s excited about the seeing The Hunger Games this week? Personally, I am over the moon about watching the big screen adaptation of the book by Suzanne Collins. I was obsessed with the story when I first read the book and would discuss it at length to anyone who would listen. Would I volunteer as a tribute? My strategy if I were to participate in the Games? Peeta vs. Gale? You name it, I talked about it. Many years after reading the book, I’m still in love with the story. As we get closer to the movie release, it’s hard to find someone that hasn’t heard of the series. Are you planning to see the movie when it comes out on Friday, March, 23rd? If so, the library would like to sweeten the experience!

The Plainfield Public Library will have a table at Rave Motion Pictures in Plainfield on Friday, March 23rd. If you’re there to see the movie between 5-7pm, stop by the table and show your Plainfield library card. You’ll be entered in a drawing for the chance to win one of five different (and awesome) prizes! How cool is that? Good luck, and…

“May the odds be ever in your favor!” 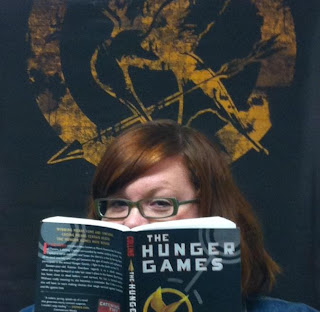