Documentaries are my favorite films.  When I was a student at IU, I was lucky enough to take a class that focused entirely on the documentary style.  It opened me up to a whole new world of entertainment!  Last fall, one of my favorite filmmakers, Morgan Spurlock (Supersize Me), hosted a show on Current TV called 50 Documentaries to See Before You Die.  I was very proud to say that I had seen well over three fourths of the list, and over the past few months have been watching the rest.  There were several documentaries that I love that didn’t make the Spurlock list…….so I decided to compile my own “50 Documentaries to See Before You Die” list.  And, the great thing is, the library actually has them all!

Check them out!!
Click the links to place things on hold. We’ll pull the DVD and have it ready and waiting for you! 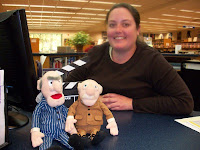 So, yes- that’s my list.  I highly recommend each of these titles.  Let me know if there are any that you feel should be included…..I always love to discover a new great documentary!