A fascinating story out of Britain today: the remains of the last Plantagenet king, Richard III, have been identified after being discovered under a municipal parking lot. Richard was killed in battle against Henry Tudor (subsequently known at King Henry VII) and the whereabouts of his body remained a mystery for several hundred years. The death of Richard, and the marriage of Henry to Elizabeth of York (who, trivia buffs, was a daughter, sister, niece, wife and mother to various kings of England) ended the War of the Roses.

There’s a reason why George R.R. Martin cites the War of the Roses as inspiration for his epic fantasy A Song of Ice and Fire – the political intrigue and positively dysfunctional dynamics of the Plantagenet family are legendary. They are also marvelous source material for contemporary authors of historical fiction.

And no one is doing historical fiction better right now than Hilary Mantel, the two time Booker Prize winning author. She struck gold first with Wolf Hall, a novel about Henry VIII, his marriage to Anne Boleyn and his failing out with Sir Thomas More, all told from the perspective of one of Henry’s principle advisers, Thomas Cromwell. Mantel presents Henry as an almost sympathetic character, no small feat considering his popular image as a lustful, obese consumer of roasted turkey legs.

Last year, a  sequel called Bring Up the Bodies was released to widespread acclaim. It tells the story of Anne’s downfall and execution and Henry’s match with Jane Seymour.  A third novel, chronicling Cromwell’s own fall from grace and subsequent execution is planned for the future. 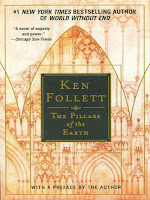 Following close behind Martel is Ken Folltet who has authored two novels featuring medieval English politics. The Pillars of the Earth and World Without End are set in a fictional town called Kingsbridge and closely follow various English royalty including the Empress Maud, Henry II and his “troublesome priest” Thomas Beckett. Pillars of the Earth has also been made into a TV miniseries.

Finally, Sharon Kay Penman has a stand alone novel – The Sunne in Splendour – about Richard III, whom she casts in a good light. She also has a great series featuring Henry II and his queen Eleanor of Aquitaine starting with the novel When Christ and His Saints Slept.